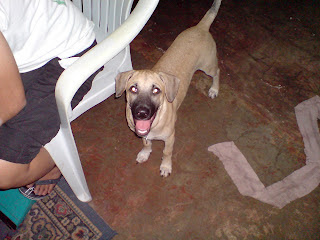 I'm not a pet person. I think pets are cute and I'd be willing to watch over it for utmost 5 minutes.
But I definitely do not want to "be a companion of" one. I strongly feel that people with pets are screwed.
I'd worry too much if I didn't use enough pet shampoo or whether I should get the milk flavored chew toy and not the multivitamin bone thing.
Worrying does not suit me.
I came home a few weeks ago. And something fluffy jumped me. It immediately sniffed my butt, slobbered on my feet, and nibbled on my boobs. Shit. My sister got a pet dog.
My room is occupied by my sister so we had to share the room whenever I visited home. It also meant waking up with an awesome view of Boo's butt.
I slept for 2 hours and sneezed for 6 hours. My slippers were swimming in what I hoped was water in the middle of the living room.
I learned a lot of stuff too. Dogs can snore. He is 98% genetically identical to skunks. Their farts should be the 8th wonder of the world.
If you chase him, you will chase him forever. Your slippers will never look the same again. Looking for your slipper would equal Indiana Jones' treasure hunts or whatever Indiana is running around for.
70% of the pictures taken will be fluffy blurs. If he hates you, he will hide under the sink, ignore you when you call him and wait there for 3 hours until you go, carry him out and comfort him.
When there's a lightning storm, you will find him behind the refrigerator. If he is bored, he will eat your hair. If he is happy, he will eat your hair. If you dress up to go out, he will tug on your pants until you're half naked. He will also chew your shoes and hide it behind the washing machine.
He will chomp your cellphone when it rings. He will also bring stuff inside your house that you thought were extinct.
Yep. I'm definitely screwed. Boo (short for "boang" - "Crazy") 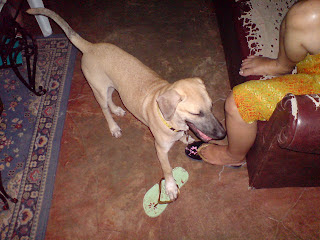 (Notice the sofa? Yeah.. I didn't think dog saliva could do that either. Don't bother with sofa comfyness. It does not exist.)
Posted by acheron at 1:16 AM No comments: 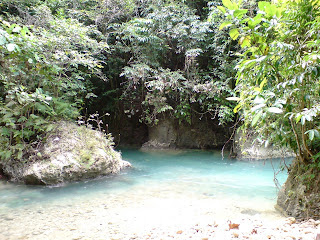 Coming home last May, we decided to visit Kawasan Falls.
It's a 2-3 hour trip. If you're going by bus, the South Bus terminal is pretty easy to find. The bus fare ranges from P40 to P120. It's weird actually because the fare depends on the bus company. I mean, they could probably charge you P500 if you're ugly. 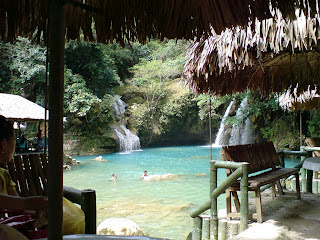 The one thing I learned? Don't bring all the groceries you purchased the day before unless you want to lose weight and have abs of steel.
When we got off the bus, the weather was as cold as Tagaytay. Anyway, locals flocked us offering to carry our stuff for P20.
We weren't carrying much (only a refrigerator's worth) so we politely declined their offer.
One old guy was still pestering us and continued to walk beside us. 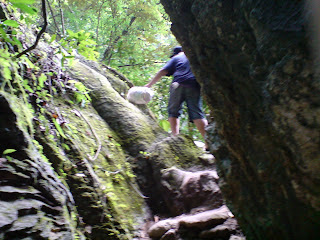 We wanted to go to Fall 2. FYI, Kawasan has 3 falls. The first and nearest one is the largest. The others are a bit smaller.
It was a pretty uneventful 20 minute walk to Fall 2. We passed about 300 bridges. When we got to the
destination, the old guy that walked with us whipped out this piece of paper
stating that he had police clearance to collect P200 from us. What the fuck.
It's a good thing I know how to read though. It also said that IF he carried our stuff, we'd be obligated to
pay him. Since I wanted to develop abs of steel and he looked like he'd die if he carried our bags, we dodged
his extortionist ass. But we still ended up giving him P50 and some lunch. We're not that cruel. After paying the cottage guy (P300), we settled in for lunch. 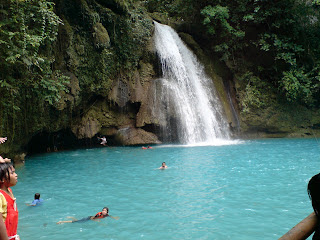 Kawasan was a very beautiful place until I took another step and the once waist-deep water plunged into nothingness and my life flashed before me.
I knew I should have listened to my swimming instructor. After gulping down half of the waterfall, I clung to Marian (who was wearing a life jacket) with both legs. There were 50 peso life jackets available and I have no idea why I ignored those. Anyway,
we continued swimming in the ice cold waters - now a bit more braver with our very red life jackets.
Walking back, having my fair share of Kawasan swimming in my belly, I was surprised to find that I wasn't the least bit tired.
It was probably the cold water. Overall, it's a pretty cheap but awesome getaway. 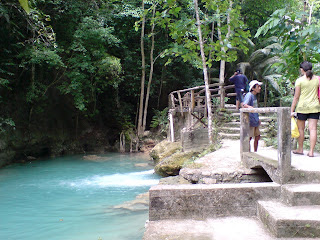 (One of the millions of bridges in Kawasan. The guy with the white hat was our "tour guide". See? He is a frail and little old man. He'd die if he carried our stuff.)
Posted by acheron at 7:28 PM No comments:

Tips, tricks and other pita stories

I'm pretty sure everyone has their own lists like "do not forget girlfriend" or "stock up on fudgy fudgy bars", etc. I only have 5 simple reminders before going on trips. So here's mine.

1. Empty your fridge of food that will probably morph into another life form that chews your couch and dismembers you when you get back.
I think this also applies to unwashed underwear and dishes. Wash them People! Or just throw 'em out.

2. Never hang your underwear outside. The weather has an interesting take on redefining garments as art.
This holds true for shoes as well.

3. Throw out your trash. Creepy-crawly-things will come out and creepy crawly your apartment.

4. Unplug everything. Believe it or not, your glass table is flammable.

5. Your goldfish will not eat the very-cool-realistic-plastic-plants and the yummy-looking-red-and-yellow-and-green-thingies in their tank. 'Nuf said.
Posted by acheron at 2:35 PM No comments: