Got a mini amnesia from all the work I'm doing in Friendster. (Yes, it "still" exists. I'm not messing with you. I was actually surprised too. When they asked me to come for an interview, I thought I was gonna have to ride a train on some sort of 3/4 platform and pass by Hogwarts. I did look forward to the train ride. But, instead, I rode a taxi to Makati).

I was reminded last night that I actually had a blog! Yeah.. I have a million things to write about (specifically Sanga's new weirdness - Recently, she got locked out of our apartment. Got stuck in our balcony while posing for pictures wearing a blazer and a few hats. Teehee. More on that soon.)

So, I don't have much time now. I only have a few more minutes 'til my engineer partner comes in and we write another magical code to make the site actually show up.

And what did I choose to talk about in my few precious minutes?

You've all cupped the warm egg (no pun intended) in your hands.

Anyway, my current engineer partner is an American. I've teased him about eating balot a couple of times. We decided to get him some balot but he always magically disappears. He now flinches at words starting with "ba.." even if I just meant to say "ba"ndana...
So what's the fuss all about?

This may sound so un-Filipino of me but Balot gives me the hibbyjibbies. Yes, I've eaten the egg and sipped on the "soup". I've even tried chewing (for hours.. hourss!!!) on that white rubber thing on the bottom of the balot but I have never placed my tongue anywhere near the fetus. 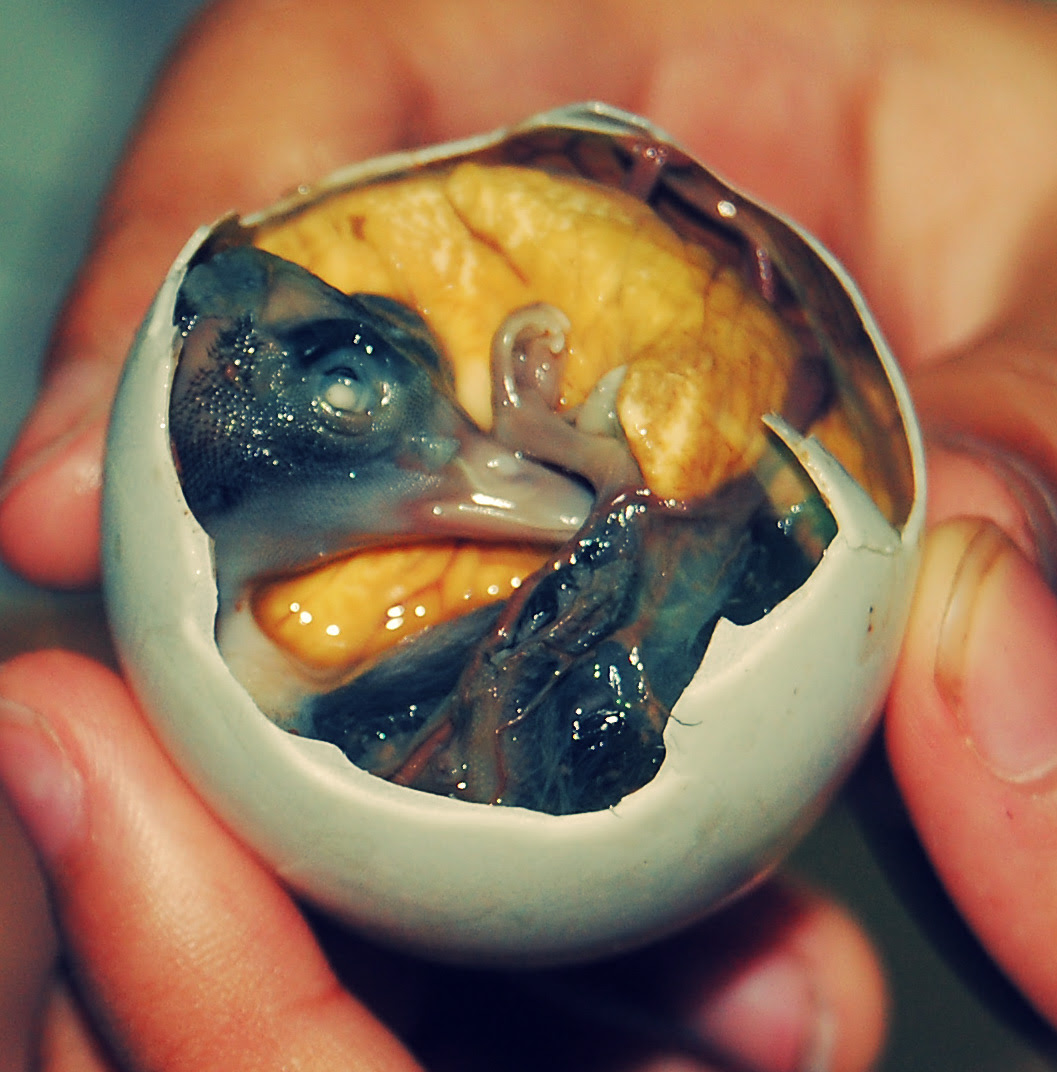 I eat chicken intestines (isaw. yumyum) but not when it's still inside the actual container. And not with beaks and feathers. 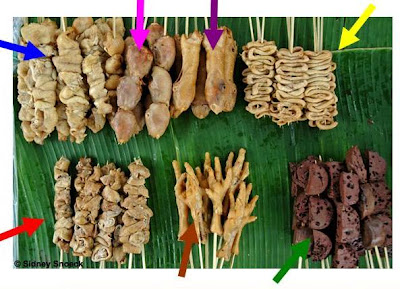 Here's a list of street foods I "might" consider eating but have not yet eaten :
- chicken feet
- chicken neck
- chicken head
- chicken ass -- basically, all weird chicken parts. But I eat chicken nuggets that is reportedly a mixture of these parts. I don't care as long as I don't actually see them.
- betamax (coagulated blood) --- Sanga says this is awesome but I don't believe her. I took one teeny tiny bite but it jumped out of my mouth. It wasn't my fault.
- tiny tiny fried baby chicken (or is it duck?) --- It's like balut outside the shell.
- taba (pork fat that has been bbq-ed) --- It's one stick of pure heart attack. Sanga can eat 3 sticks of these.
- pig intestine --- Filthy. But possibly really yummy. Based on the number of people ordering it.

Sooo... I do love street foods. It's amazing to look at. But I'm still waiting for God to give me the courage to make me shove the chicken head down my throat.

ants in my pants

I just read a yahoo article about a green blob spouting new stars that are probably just a million years old now (yes. geeky. whatevs). But what really caught my attention was this :

"The blob is the size of our own Milky Way Galaxy and it is 650 million light years away. Each light year is about 6 trillion miles."

I tried inputting the numbers in the laptop calc but it died on me so I had to restart my laptop. WTF right? Kids, don't do this if you don't have a powerful processor.

Aliens. There must be something else out there. If we're alone, then it's a serious waste of space, dude. Come to think of it.. We could be ants in someone's pants. Actually, I think we're quarks on an elephant's ear wax.

With this in mind, I suddenly feel a lot better. I'm not stressing about the bills, loans, pimples and uneven skin tone anymore. I've been so self centered lately. Tsk tsk.

But I still think I'm going to win the lottery.. if I can just find the time to actually bet on it.

Oh btw, my gf (The Great Pax of the Fashion World) has a hater. LOL. Imagine that. She's the most sanga person I've ever met and she has a hater. Nyahahah.. That's just too funny.

Yeah yeah.. she already knows she's not the prettiest meat blob. Well, I like her just the way she is. And 65million years from now, when her face has more lines and intersections than the roadmaps of the world, I will still think she's 'da bomb'. Ya heard? (i am so not cool) I hope she knows I think she's the prettiest meat blob. Everybody has an opinion but not everybody's opinion should matter. Seeing that we're like this tiny tiny dots on the greater scale of things, the best we can do is to be happy about who we are and be grateful of what we have. Ang hirap mag english.
Posted by acheron at 5:56 PM No comments: