I've been working in Makati now for about 4 months. And the commute is just pure hell. Nyahaha! I've gotten used to it though. Now I join the symphony of snores by my fellow fx-ers.

Going to Makati from Marikina is a no-brainer. But going home? Ohhh the choices. Should I take the bus? MRT? Jeepney? FX? Taxi? Fly?

Taxi is a no-no. Unless you're rich, then by all means go and flag those demons down. (Yes, I still have a thing against most - not all - taxi drivers)

MRT? Sounds like a time and money-saver right? MRT = long lines and pushing! There's a long line for the jeepney that takes you to the station. At the station, there a long line for the tickets. And there's an even longeeerrrrrrrrrr 1000000x line to get inside. If you're lucky, you can get on the 1st or 2nd train. But I usually get on the 3rd one. Then you walk from Araneta to Gateway. And another long line (now bearable) for the FX. ETA : 2-3 hours 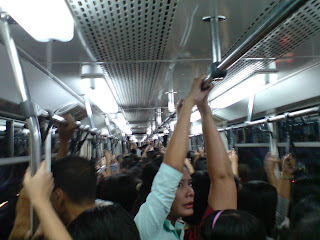 (see that look on that lady's face? pain. dread. the females have it easier though. i passed by the male cart and it smelt of mm.. men. i took this picture with someone's elbow on my kidneys and some girl's face stuck to my boobs. oh what joy)

FX behind Enterprise? This is ok though if you leave before the clock strikes 6. But if you get there at around 6:00:01, you'll be on a 2-3hour road trip. And then you'll have to get off at Concepcion and ride another jeepney to NGI. ETA : 1- 3 hours. Depending on your luck.

Best way to get home so far? Bus to Megamall and then FX to Marikina. Minus the bomb threats and if it's NOT raining, ETA is just around 1.5 hours. Awesome huh?

I really should learn how to fly.

Wow. Strange. I haven't opened this since the medieval times. Too lazy.. :p Well.. I'm still with that crazy lady from lala land. And we've survived :

- Ondoy. God. That was a mess. I actually saw some dead fish on the muddy streets. Terribly missed the laid back weekends where we just pig out and watch DVDs. It's a good thing everything is back to normal.. ;) --- semi normal since Aisa has now upgraded my status into a Taga (tagabitbit tagabuhat tagataga). She's busy with work, school, business. Crazy. But I'm happy she's finally doing things she wants.

- Freezing my ass off in HK with Aisa's family. It was super fun! (understatement but I can't think of any words right now.. I could just jump up and down though to show how happy I was --> || um.. no jumping emoticon so I'll just do a *clap clap and ^___^ !)

- Spent our Valentine's day on Corregidor. You really should go there. You'll learn a lot. We're planning to go back for an overnight stay. More time = More activities. Aisa is excited about "ghost hunting". Um. Good luck with that dude.

- Sands in my butt by going to Boracay three times. Yes. Three times. I dunno why we even bought tickets. Augh. I'm never visiting that place again in the next 3 years. hehehe.. Don't get me wrong. We did lots of activities there. Reef walking, parasailing, etc. Ate our hearts out (especially loved the gelato and the lobster). But three times this year is really more than enough.

- "Surfing" in La Union. But I never got to surf. I valued my nose too much. We were scared off by the stories of broken noses and such. It was still fun to do the wave thing though.. :D

- Crossing the streets in Vietnam. It's an art form. I think it should be on the top 3 of the most dangerous things to do. Loved the place though. I could almost hear the bombs going off in the underground tunnels. And then we realized there used to be millions of dead people there. Kripi. Toured our hearts out plus Aisa bought her "comfiest shoes ever". So now we don't have to go back to HK for the other "comfiest shoes ever".


Yep. My every day has been nothing short of crazy.. but I'm loving every second of it. Diba Sanga? :D
Posted by acheron at 11:30 PM 1 comment: