I don't dress up. I just never really bothered with it. Shirts can solve anything. Even my mom has given up bribing me into wearing anything remotely fancy. The most I've dressed up for a party was when I wore shoes instead of slippers. Last year, I won a laptop and went to claim my prize in slippers and ragged jeans while they were all Vegas-ish looking.

Anyway, this year, Aisa actually convinced me to wear something presentable. Or at least something in tune with the theme (Past Forward - 70's 80's 90's outfits). 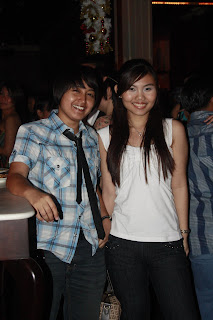 I wore a tie. And a polo shirt. Well, they ended up strangling me with the tie.. which I thought was fun. 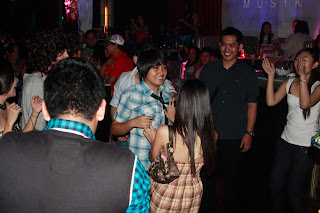 They were kinda pushing me around so it just looked like I was dancing. Honest. I don't dance. 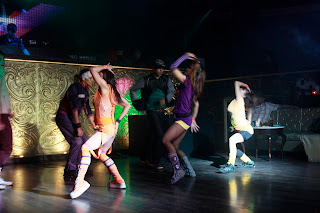 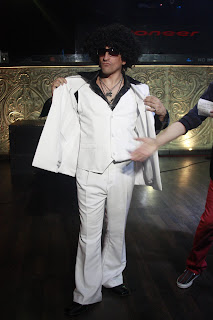 (Gabe! He won the best dressed thingy that night. Complete with bling bling) 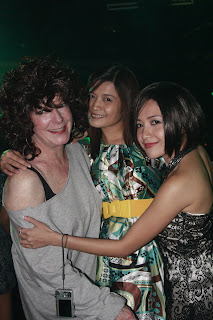 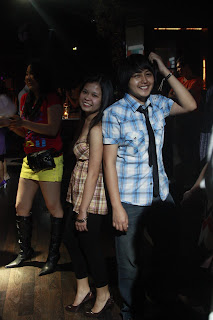 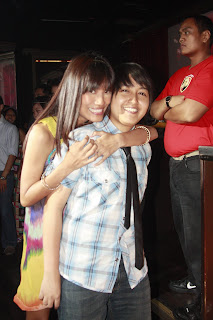 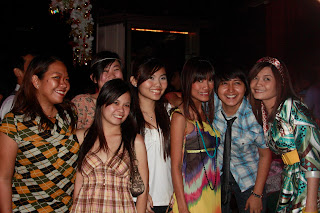 Well, it's one of the most memorable things I've done in my life.. Plus it didn't hurt that I spent it with some awesome friends.
Posted by acheron at 3:25 PM No comments:

There's not much to say.

Except that.. Well.. I don't know why it took me such a long time to write this. I guess I was ruminating in the fact that we actually broke up. Writing about it makes it so final.

Yeah. Marian and I broke up. Lasted 7 and half years. It was a good run. And I never regretted a day being with her. It wasn't a bad break up at all. Surprise. There were no fights. No cuts and bruises. No UFOs (as one would expect). I've never broken up with anyone before. It's an interesting feeling. And it's definitely not something I'm looking forward to feel anytime soon.

I've felt responsible somehow. I felt guilty for throwing away the most concrete thing in my life. She is my rock. Or was. She has kept me steady all these years. Now I'm trying not to drown. I guess I'm succeeding, huh? We are both dating again. She is happy. And so am I.

Eb, if you're still reading this blog, a song for you.. And thanks for the memories.


"Where I Stood"
By: Missy Higgins

Adapted from peyups. It's a nice read.

It started with a crash.

I guess everything somehow starts out this way.

Things colliding with varying degrees of force, it is in the heart of everything. It is in the heart of both creation and destruction. Immense quantities of energy are produced by the swirling, chaotic dance of atomic particles crashing into one another. Lives are ended when bullets and shrapnel run into vital organs.

The universe is one big bumper car ride and more often than not, these collisions leave marks that would last us for the rest of our forsaken lives.

This epiphany happened when your existence first crashed into my reality. You are a bowling ball bringing disorder to the orderly group of ten pins that is my life. You suddenly appeared without warning, very much like Germany's blitzkrieg invasion of Europe, and there's no way in hell that your commanding presence could go unnoticed.

Pretty much like introducing a bullfrog to an alien ecosystem, everything was thrown off balance. Every routine, every habit, schedule, every time table I've planned you turned conveniently to crap. Instead of being alarmed, I was drawn even more so to that magnificent source of distraction, destruction and pain.

My days were soon filled with the constant bickering (You always looked so cute whenever you're annoyed so I tried to piss you off as best as I can), the smug swagger you'd do after I've given up and surrendered to your whims, the shrill, ear-piercing shriek as you sang, and the way you playfully smack the back of my neck for no apparent reason. Curiously though, these are the high points of my day.

Despite the harrowing carnage that you've wrought, I started to rebuild around you. I made you the agora of my new metropolis, very much akin to how a tree's bark grows over a deeply-driven nail.

Oblivious to the painful fact that deeply-driven nails can be forcefully removed, leaving the bark disfigured, and dying.

As sudden as your arrival was your departure, effectively transforming everything in my world into one beautiful, putrid, decrepit, twisted and twitching mass of emotional trauma. Such was your power over me. Yet something tells me that I wouldn't want it any other way.

Now I believe, neurotic as it may seem, our time together was really brief, almost a split of a split second in a cosmic time scale of the universe. As instant as the moment of contact a bullet shares with a wall before ricocheting away. (Though some walls are lucky enough that some bullets get stuck). Our encounter was so brief and quick and instant that it shouldn't really matter. To further dwell on it is just a waste of time, oxygen and brain cells.

Why the title then? Why all the talk about crashes, collisions and impacts?

You are a 460mm shell fired off the massive guns of the legendary WWII battleship Yamato.

I am a wall of the first little pig's flimsy straw house.

And while you have decimated and obliterated me completely,

I wasn't able to manage even the slightest dent on you.

Posted by acheron at 2:29 PM No comments: