I have to stop for a bit.

I've been reading zombie stories a few hours after my last post. Thus explains my lack of interest in my blog for a few weeks now. I've been deep in zombie guts that I've forgotten all about watching Bear Grylls eat raw snakes and falling into deep holes (lol on that one).

Breakfast. Lunch. Dinner. Even brave enough to add a dash of ketchup. While reading about guts and blood. Eyeballs popping yellow puss. Maggots. The smell of shit hitting the fan. A thousand rotting corpses. Ripping. "Chewing". I have a very active imagination and sense of smell. Despite that, I held my food in. No vomiting of sorts. Yeah. I have boobs of steel and claws in my vajayjay.

But then, I happened upon a story that turned my stomach. The one and only story that made me want to hurl. It's a story about oldies (60-70 year olds) fighting over a guy and having sex with him even though he is already a zombie. It results to one of them having a rotting vagina. He's a great writer. Described it perfectly. Once again, I have a very wild imagination. Cursed.

I can totally relate to Sheldon when Howard said that "Gammy" had sex and she liked it. Nobody talks about Gammy that way!! Yaaakk.

So we're here. I'm still trying to hold my lunch down.

My zombie scenarios have rubbed off on Sanga. It worries me because she is paranoid at times. But it's nice to cuddle and plan with the Sanga about the layout of our zombie proof fortress. It's kinda like planning about a wedding and kids. Only a bit more morbid than most.

The Sanga has this habit of ordering mounds of food (3-5 different kinds), eating a few bites, and then stocking them until she has the urge to eat them again.

For example, she would order Jollibee Champ, fries and pancakes. Then I would wake up to a half eaten burger, a few missing holes on the pancakes, 5 pcs. of fries, and a half eaten chow mien (she got bored with her array of food and had to cook up another one).

It never ceases to amaze me how she will never touch fish without soy sauce, kalamansi, and chili. Never forget to ask for additional ketchup or else she'll never touch the chicken.

I complained once about the shelf. So she tried to eat everything on that shelf at once. 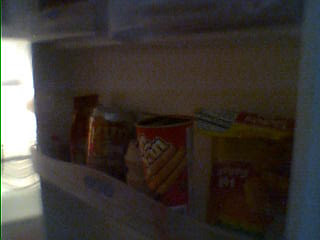 (pardon the crappy photo)
And then she raved on for a few hours because of a sugar high. Oh my bleeding ears.

There's no point to this post actually. I just find her and her shelf amusing. Mehehee. I'm currently staring at the half eaten chicken wing on the table.

I'll probably post about her sleeping habits next. Oh you won't want to miss that!