There are only 20 engineers in the company I work for. We often sneak out of the office. It's actually pretty easy. It definitely helps if you have mad skills to hack into the system cameras and just make it crash. Or, for those of us who aren't that geeky, if you had some sticky notes to ambush the camera with.

Anyway, there was this one time.. at band camp.. where we just wanted to get out and destress. The business owners were especially demonic that day. I wanted to buy a car just so that I can squish one particular guy. I seriously considered 4-wheelers just for him. Another engineer considered committing homicide with a toothpick. We had to get out.

You should really try it.

Caution :
People with nose or boob jobs or other 'extensions' should just forget about it though. Your silicon parts might stick to the bull when you slam into it. Deformed boobs aren't that awesome. I saw a guy who skewered his balls on the bull's horns. Ouch.
Posted by acheron at 7:56 PM No comments:

Tagaytay not so FAQs 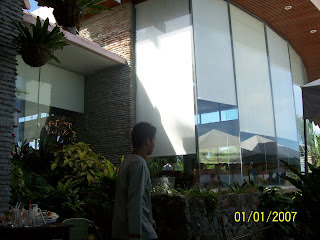 So.. Anyway, we got off the bus and immediately rubbed each other’s body.. for warmth of course. Effin’ cold place. After getting settled, first stop on Marian’s “itinerary” was Josephine’s restaurant. This is actually a food trip. 90% of the items in her itinerary were restaurants.

Josephine's had a lunch buffet for only P360+ minus drinks. Their food is...... ok. Marian can cook better.. if she knew how to cook. But the best thing about them is that they have this awesome grill guy. He can grill anything you want. Just point and he’ll grill it. Grass, roots.. branches.. for real. But if you’re not into that going-back-to-earth thing, they also have tilapia, pork chop, blue marlin and beef. 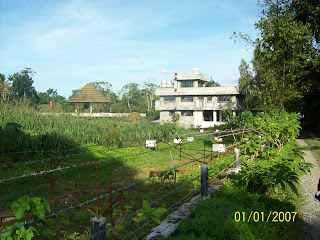 We also went to Ilog Maria Bee farm. No sane person would ever attempt to visit this place without a car. The old lady said that it’s a pretty short walk from the main road to the farm. Just a few steps. We thanked her and started off on our rough road adventure. On the way, we met Becky, the one-horned cow. She didn’t mind us and just merrily chewed her brown and green-ish grass with twigs. When we got to the corner that the lady pointed, we saw another corner. We thought that maybe the lady meant that corner. We continued our journey and saw.. something. My girlfriend screamed and climbed on my back. She swore she saw a 3-foot rat scurry by. I swore I saw a bird. Then it crossed the street again.. and flew. But then I swore it was furry and had a tail. In Tagaytay, rats can fly. When we got to that corner, we saw.. another corner. And then another. There were creepy empty houses on the side. I wasn't really afraid coz I can fly, ya 'know? 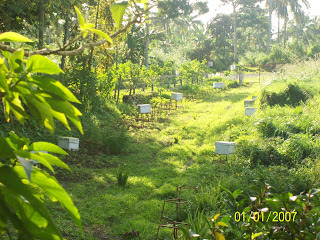 Finally, after climbing an incline, we saw millions of bees.. Righhhtt.. The beehives were pretty barren and had just two or three bees buzzing around. But we discovered China’s best kept secret. They have about 20 Chinese customers leaving the place. They have a modest store with just a few shelves of products. While my girlfriend was busy cleaning out their shelves, I took the time to look around their place. There were more beehives at the back. I thought I’d at least see people in white suits or something. The most exciting thing there was finding the bee pollen. We read that the bees stick the pollens together with “something” and stick it to the back of their legs. Marian said it was edible. Yeah. Right. 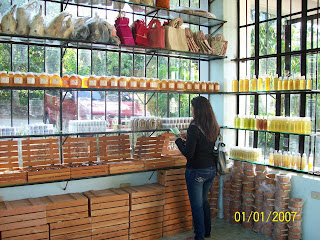 But they do have pretty cool products. We really liked their minty lip balms.

We set the alarm for 3:30pm. We wouldn’t want to get caught there after dark. It was time to head back. Marian was calmer after purchasing the bee pollen, lip balms and other honey bee excretions. It was pretty uneventful until we saw Becky again. She was now right beside the road we were walking on. She was staring at us and did this maneuver that can only be described as the sharpen-horn move. She kept on rubbing her horn on the sides of back. It almost looked as if she was itchy. But we knew better. She really wanted to kill us. It was getting late so I dragged my girlfriend forward. She would have screamed but I told her that the cow would surely skewer us. We took a few steps. So did Becky. We took more steps and then bolted. 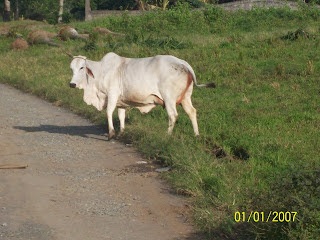 Turns out, Becky was tied to something in the field. Stupid rope didn’t show until after my girlfriend wet her pants. We took a picture of Becky to remind us of our near-skewering experience. The old lady asked if we bought something. Told her we bought a few stuff and politely smiled.. Holding back the urge to update her knowledge on the corner count. Heading back the main road, we saw two cars full of Chinese people. Again, China’s best kept secret.

You should also go to the Picnic Grove. Pretty easy to get there. Just ask around. Just a few steps inside, you will be met by people offering horse rides. Their initial price was P200 for one hour but it kept lowering to P150. My girlfriend is a bargain Goddess. We ended up renting two horses named Grace (mine) and Kakone (Marian’s). 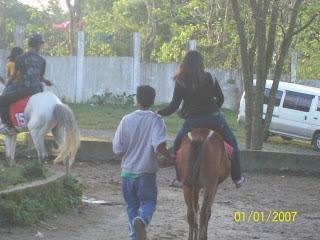 It was the first time we ever rode horses. My girlfriend immediately freaked out because she couldn’t balance and her butt kept on slipping off the saddle. But we already paid, so she had to keep the screaming to a minimum so as not to startle the horse. The guide had to hold her leg to keep her from slipping. We were pretty psyched when the horses walked around the circle. After the 10th round, I was bored senseless. The guides suggested we move on to a different course for P150 each. We did our bargain dance again and they settled for P150 for the both of us. I have a feeling we were being ripped off.. Oh well. It beats having to stay in that damned circle. At least I didn't have to fight to stay awake anymore. While my girlfriend was yelping, I, on the other hand was a pro after half the round. I think it was mostly because my horse was as calm as I was. Her horse kept on going sideways. Maybe her horse was drunk? Or maybe it was a silent protest to someone’s weight. Even though she had to hang on to both the horse and the guide, we both had a pretty awesome time with the horses. 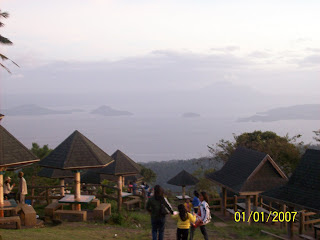 We got off after a few minutes and proceeded to the Eco Trail. We took a few pictures. Just 2gig’s worth of memory. The climb up was pretty good exercise. We had mini heart attacks every 3 steps. Fun. When we reached the top, we took a moment to catch our breaths and review some of the pictures. After 5 hours, we finally felt rested and headed back to the hotel. The damned tricycles asked for P100 for the trip back. This sweet little old lady suggested that we wait further up the road so that we could get on the jeepney first. She was selling this delicacy wrapped in a piece of paper. We bought one out of gratitude. It was really cheap too. P10 for 4 espasols! Astig. 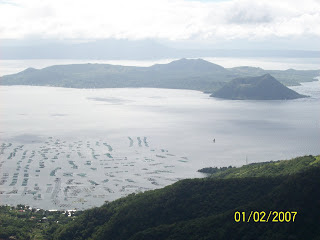 Anyway, we finally got on a jeepney and headed to Antonio's grill. I’m not sure if we ordered the right stuff but their food was really not worth it. The grilled squid was still alive.

Bedtime. Of course, I got lucky. We were lying in bed. Marian was cold.. and half asleep and punched me in the face when she couldn’t wake me up. She couldn’t remember it in the morning of course. Anyway, I woke up to a frozen leg and a black eye. It was effin’ cold. Bring a blanket when you visit this place. The towels did a pretty good job though.

We asked for our free breakfast but it took them 3 hours to cook the egg and I was starving. The espasols looked delicious so I ate it all. When I got out of the shower, I noticed some rashes on my face. And then it was everywhere. Really really itchy. Turns out, I was really really allergic to that. I had to take 2 kinds of drugs for a week. When that didn't work, I had to get a shot of this P300 allergy drug. And then I had to take some pills for another week. Sheeeshssshhhh.. 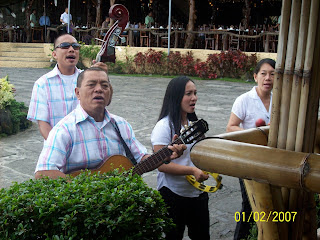 We had lunch at Leslie's. This is, by far, my favorite restaurant. They have good food. Reasonable prices. And there were people serenading us while we ate. They sang our song too. Awesome lunch.

We also visited other restaurants but we didn't get to eat there anymore. It was time to buy the pasalubong (presents) and stuff.

Our trip there was pretty fun. We're gonna try going to the Taal volcano. But we're gonna have to learn how to swim first. Marian has this thing about crossing lakes.
Posted by acheron at 7:55 PM No comments: 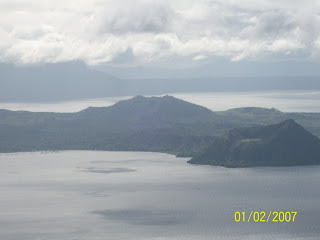 Ok. I wanna get all the FAQs done before I jump into the trip details. I know there are people who really don't give a shit about how many pink cars I saw during the trip (there were 2, by the way). Yes. I'm actually considerate. Sometimes. No. It’s not yet the end of the world. 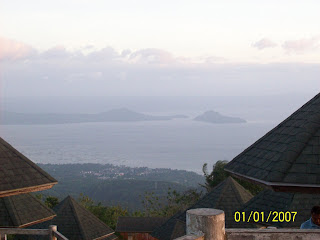 There are actually a lot of places to stay. We're gonna try Taal Vista next time. I’m hoping it’s haunted. If you want to get anywhere, just ask around. Filipinos are generally friendly.